skip to main | skip to sidebar

Is workers’ compensation spending on healthcare significant?...Would a "single-payer" system make a difference? 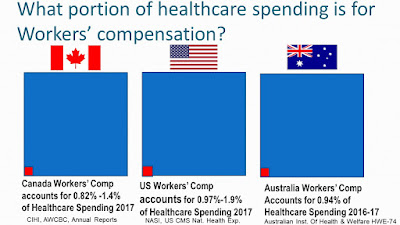 I’ve received a lot of questions recently on workers’ compensation healthcare spending in Canada, the US and other countries.  These questions appear have arisen as several US states and political analysts have proposed consideration of “single payer” healthcare systems for their jurisdictions.


At the California state Department of Workers’ Compensation (DWC) Educational Conference, my presentation highlighted workers’ compensation healthcare spending.  Time and format restricted the depth of that presentation.  Hopefully the following background will answer in greater depth some the many questions on this topic and help policy makers better understand the scope and context for their deliberations.

Healthcare spending is a big part of the economy

National spending on healthcare is difficult to compare across economies but may be expressed relative to Gross Domestic Product (GDP) or as an average cost per person (see https://www.cihi.ca/en/how-does-canadas-health-spending-compare-internationally
for comparisons based on 2015 data).

The Organization for Economic Cooperation and Development (OECD) estimates average healthcare spending at about 9% of GDP with the US the top spender at about 17%; Canada, Australia and New Zealand are all slightly above the OECD average with national healthcare expenditures between 9 and 11% of GDP.

One might expect more spending will result in better health outcomes for the population.  There are many metrics on health outcome:  life expectancy, child mortality, disability-adjusted years of life, etc.  Many of these show some correlation with national health spending but there are exceptions.  Spending more does not always result in better health outcomes.  This chart compares life expectancy at birth and national healthcare spending [US in blue, Canada in Orange and Australia in white compared with all other OECD countries]. 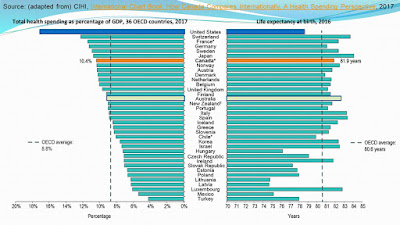 What portion of National Healthcare Expenditures are related to Workers’ Compensation?

In jurisdictions where hard currency amounts are actually expended by workers’ compensation systems, tracking and summation by reporting authorities is complex but relatively transparent.  Not all workers’ compensation systems (or other mandated employer liability arrangements covering occupational injury and disease) in the world cover medical costs; instead, healthcare spending arising from work-related injury and disease may be paid by the individual, included in mandated public or private health insurance coverage, or covered by a universal health plan.


[from Costs to Britain of workplace fatalities and self-reported injuries and ill health, 2016/17,  Annex 2: Detailed breakdown of costs by cost bearer in 2016/17 (2016 prices), [Health and Rehabilitation category] Published 31 October 2018.
http://www.hse.gov.uk/statistics/pdf/cost-to-britain.pdf ]

Total current healthcare expenditure for the UK in 2016 was £191.7 billion, so these amounts represent about 0.5%-- a little less than the proportion estimated above for Canada, the US and Australia.  The difference is likely related to the set of spending amounts included as work-related.

Healthcare or medical aid spending accounts for more than half the current year claims expenditures by workers’ compensation insurers in the US.  In some states, the proportion is even greater.  In Canada, the data suggest a lower proportion, from about a quarter to a third of current year benefit expenditures paid in the year for claims from all years (for most jurisdictions).  It should be noted, however, that Canadian workers’ compensation benefits tend to be greater than those provided in the US (typically 85-90% of Net or spendable average earnings vs. the typical 66 2/3rds % of gross, generally higher maximum insurable limits, cost-of-living adjustments, etc. ); Canadian healthcare costs (including for many hospital services and prescriptions) also tend to be lower cost than those in the US thus making the healthcare component of current benefits paid appear somewhat lower.

Why is this important?

Many jurisdictions are looking at their healthcare expenditures.  Proposals in the US include reforms from single-payer systems, 24-hour coverage, and other arrangements.  Proponents of one position or another may draw on Canada, the UK, Australia, or other national system as examples of what to do or not to do in any reform.  While there is no question that comparisons can highlight important differences and may even suggest opportunities, there are challenges in understanding other systems and the context in which they arise.

One key point to remember is the relationship between claim cost and premium for workers’ compensation insurance. Under the insurance model used in the US, Canada and Australia, workers’ compensation premiums are designed to reflect indemnity payments for lost wages, other benefits (such as rehabilitation), and the costs of medical care that may be needed for a lifetime.  This structure is based on the premise that the industry (or enterprise) that gives rise to a work-related injury or disease ought to cover the associated diagnostic, treatment and medical/rehabilitation costs. Self-insurance provisions seek to confine costs to the insured entity and experience modification to premiums (x-mod, experience rated assessment, etc.) are intended to distribute costs more directly to the entity giving rise to them.  The workers’ compensation insurance cost (including the medical cost) reflected in the premium forms part of the incentive for increased prevention and improved return-to-work outcomes.  Failure to confine and fund the medical cost to the workers’ compensation system by definition will externalize those costs to someone else (often the tax payer or premium payers for other health insurance programs, the worker, worker’s family or community, other employers, or other employees of group insurance plans).

Is the healthcare spending by workers’ compensation insurers handled similarly in the US, Australia, and Canada,?

A worker gets injured, goes to the doctor or hospital and gets treatment.  In the US, Canada and Australia, if the injury is work-related, payment for the fee for service by the attending physician or hospital service will usually be made by the workers’ compensation insurer, typically as a direct bill by the provider to the insurer. Identifying that insurer can be complicated by the number of factors.  There are often several potential insurers in most states and the responsible insurer depends on which policy was in force on the date of the injury (not necessarily the date of treatment).

In states with exclusive state funds or provincial workers’ compensation insurers, the responsible insurer is obvious and clear.  There is one insurer, on question of policy year or other coverage.  In jurisdictions where the definition of worker is independent of the coverage status of the employer, the worker’s medical expenses will be paid by the insurer even if the employer was uninsured by omission or fraud.

The situation may be more complicated in states with employer “deductibles” or other arrangements.  In the Australian state of Victoria, workers’ compensation is payable but only after the employer has paid for the first 10 days of incapacity and $707 (2019, indexed yearly) of medical costs.  [see,  http://www1.worksafe.vic.gov.au/vwa/claimsmanual/Content/4EmployerObligations/2%204%201%20Employers%20liability.htm ].

Many people assume Canada, with universal health insurance has one big insurance plan that covers everyone for every health concern.  That assumption contains many misconceptions.  Saskatchewan adopted the first “Medicare” plan under then premier, “Tommy” Douglas [trivia: Kiefer Sutherland’s grandfather].  A federal Royal Commission on Health Services in Canada under Chief Justice, Emmett Hall, recommended Canada adopted universal healthcare in the mid-1960s but universal does not mean one plan.  Every province and territory has its own medical services plan—a single payer healthcare insurance plan in each province or territory that covers all necessary insured health services… except workers’ compensation for reasons noted below.

Why are workers’ compensation medical payments not covered by provincial health plans?

Canada does not have a national, single payer healthcare plan; each province and territory does. The background is rooted in the constitution and in the evolution of healthcare in Canada.  The distribution of powers in the Canada Constitution Act, 1867, defines a relatively narrow set of federal powers [section 91] and gives provinces law-making power [sections 92, 92A) over a broader area including “hospitals”, “property and civil rights”,  and “generally all matters of merely local or private nature in the province”, (making workers’ compensation, occupational safety and health regulation healthcare, labour law clearly in the provincial domain for matters not specifically in the federal powers). [Note:  The Canadian federal government has occupational safety and health authority over industry under its constitutional powers (including inter-provincial transportation, communications, for example, as well as for its own government services and military).  It also has authority over workers' compensation for its own employees but contracts with the provincial workers' compensation boards to administer that for them.  See the Government Employees Compensation Act].

The federal government has greater taxation authority under the constitution so it had the wherewithal to partially fund provincial healthcare system, if the provinces agreed to develop them in a specific way.  Under what is now known as the Canada Health Act, [CHA] the provinces agreed to set up health plans that adhered to five principles:


(a) public administration [single payer, not for profit, public authority];
(b) comprehensiveness [all necessary health services];
(c) universality [everyone entitled to same level of care];
(d) portability [coverage maintained even if in another province]; and
(e) accessibility [reasonable access to care and reasonable compensation to hospitals and providers for services].

Both the original Saskatchewan medical insurance plan and Hall’s recommended legislation excluded workers’ compensation.  The current CHA defines “insured health service” as follows:
insured health services means hospital services, physician services and surgical-dental services provided to insured persons, but does not include any health services that a person is entitled to and eligible for under any other Act of Parliament or under any Act of the legislature of a province that relates to workers’ or workmen’s compensation; [emphasis and underlining added]

The reasoning was clear:  workers were already insured for work injuries.

Under the CHA and provincial medical services plans, extra billing or co-pays are not permitted.  In most cases, how a medical service is paid and who pays it happens behind the scenes with the physician or hospital billing the single payer provincial health insurance plan or workers’ compensation (sometimes using the same electronic platform).  Note that there is strong similarity of what is covered and not covered among provincial medial services plans but there are differences.

Healthcare spending is only one dimension

This analysis does not include any discussion of offsets.  Healthcare is a big segment of the economy; it employs many people and generates significant economic activity.  Workers’ compensation administration, rehabilitation and many other services are part of that activity.  The human and financial cost of work-related injury can never be justified by these activities but few studies quantify them.

Does universal, single-payer system have advantages for workers’ compensation?

TerryB
Richmond, British Columbia, Canada
I am a student of workers’ compensation systems. Many years ago I discovered two things about this area. First, workers’ comp and OH&S are of vital importance to people. Protecting, caring for and providing compensation to workers are important, noble and morally responsible endeavors. The second thing I learned was that no matter how much I knew about workers' comp/OH&S, there was always so much more to learn. This is an endlessly challenging area of study. My purpose, therefore, is not to lecture, but to reflect on the ideas and issues that are topical in this area... and to invite others to share in a learning experience. By adding your knowledge and insights, others with similar interests can participate in the discovery and study of this important domain.